author: This email address is being protected from spambots. You need JavaScript enabled to view it. "di Satti" kennel, Hungary

When in 2008 black russian female Teraline Ingrid won the title AIAD Siegerin and after few months repeated her big success by winning on IDC Show in Sweden everyone noticed that she is coming from the “russian AIAD Siegerin” Teraline Aurora and from at 1st glance unknown male coming from Ukraine or Russia... 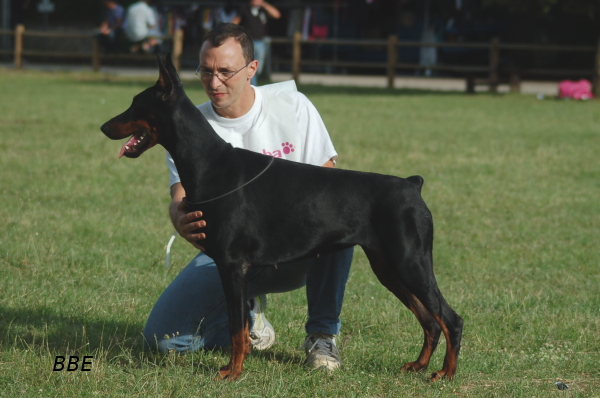 “Who was that male?” - a lot of people were asking themselves and not too many people knew something about him. Small part of them, who are surfing in the i-net and doing research for kennel, dogs, pedigree knew Atreyo as a representative of one of the most influental litters in last few years, famous “A” litter “de Grande Vinko”.

However, Atreyo was still unknown for significant part of dobermann-enthusiasts, breeders and dog-owners.

I have in my mind famous words about Lucifer van Roveline:

“Lucifer van Roveline was, in our opinion, one of the best Dobermann’s that came out of our kennels...Due to a car accident he had a short life and only mated 27 times, which resulted in 2 World Champions, 1 Youth World Champion (Pavlo van Roveline) and several International and National Champions. We are sure that many breeders, who did not believe in him during his life, have regretted not using him.” (by Roland Beunekens)

When I saw Teraline Indigo for the first time on photos and later his sister Ingrid winning on AIAD Show 2007 I was impressed about both of them. I thought to myself that there was something missed by dobermann-breeders. Male who was unknown or may be even underestimated by some people appeared to be a producer with real potential. 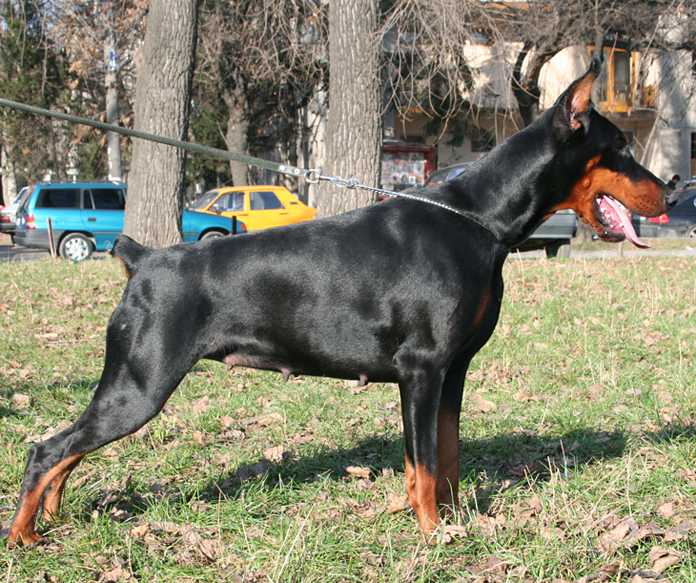 Where is Atreyo coming from?

Atreyo was the only one brown male in the litter. He was born in Ukraine (not in Russia as many people thought), in the kennel of Natalia Ditko - “de Grande Vinko”. “DGV” was already a “label”, the kennel who keeps high and stable level of quality of their dogs. We knew Atreyo's sister - Akuna Matata (mother of IDC SG Fedor del Nasi), Adamant, Adel-Adriana (from different litter than Akuna Matata).

Andromeda was shown only in Ukraine and in Russia. She was a Champion of Ukraine and Champion of Russia, she got Best of Breed title 6 times. Andromeda, in her previous litter with Baron Nike Renewal gave Adel-Adriana de Grande Vinko, another excellent representative of the breed. 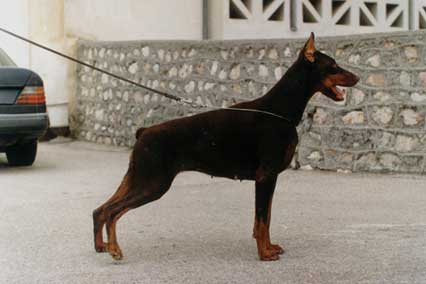 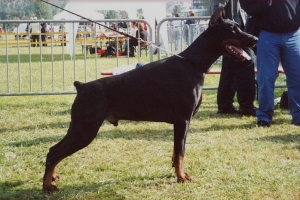 “As everybody knows, the most difficult is to find the owners for brown male puppies but we were really surprised when we found the owners for him (Atreyo) first! Married couple came to see him, asked to show all males and really were impressed by Atreyo. He was different than others. Huge head, incredible bones and very calm character. As long as the couple couln't have babies, Atreyo was their baby but in about one year the miracle happened and the wife got pregnant. Atreyo brought the happiness to their home (at least they think so) ! And that's why Atreyo wasn't showed so much. The main owner was wife :) He was a real dobermann,calm and very confident, loved so much his family, he was very friendly with people but had excellent protective abilities. He was such a great in biting that learned IPO-protective section just after some lessons...” (by Natalia Ditko) 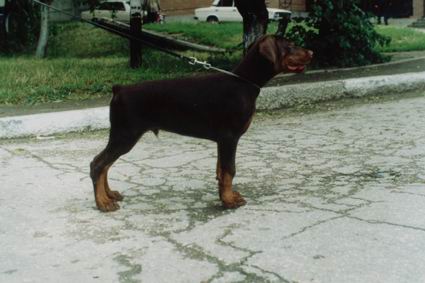 Atreyo at the age of 4 months 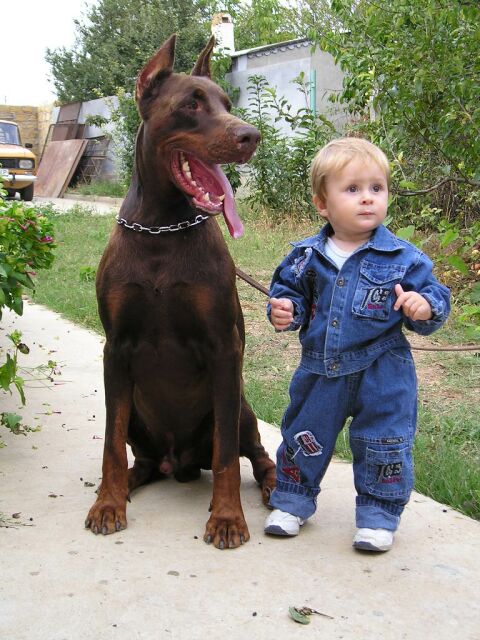 In breeding, from his litter Adamant was more popular and Akuna Matata thanks to their living place: Adamant in the beginning in Ukraine after that lived in France and in the end in Hungary. Akuna Matata was sold as a young female to Slovenia and was an important one for “del Nasi” kennel and later for breed by giving a bith to IDC Fedor del Nasi.

These dogs and their show-breeding results show us that the quality and breeding-potential is not just a coincidence.

Two the most important Atreyo's matings were with Teraline Aurora and Maksima de Grande Vinko.

Maksima is a grand-daughter of Shogun van Roveline and from mother-side there's Ak-Yar Andromeda. From this combination we know know Hanky-Panky, Henna Happiness and Hazy Dream.
Hazy Dream won the FCI World Champion title and Best Opposite Sex among 102 females in Poland, under Hans Wiblishauser. On the same show, there were another two placements for daughters of Atreyo: Atenais Avrora van Anberri had 2nd place in working class and Aqvilon Camilla first in champion class). Hanky-Panky (living in Romania) became Young Club Winner under Dr. Pezzano.

Teraline Ingrid on her first important show (AIAD 2007) had second place in young class but it was obvious for us that she is a very special one! Just few days later, she won in Croatia the European Youth Winner and Best Junior titles, while her brother Indigo won also and became European Youth Winner. “I” litter “Teraline” became famous. One year later, she easily won the title from adult class and became AIAD Siegerin, thereby she repeated a great success of her mother Teraline Aurora who won AIAD in 2005.
Teraline Indigo had successful career in Russian and in different Baltic countries. He is Champion of Russia, Lithuania, Club Winner, Young Club Winner,  Youth European Champion and has a very promissing future for breeding. We can already notice a group of his quality progeny.
Teraline Italy, who is living in Israel became a winner on important dobermann event in Austria and was a successful show-dog in Israel. Impreza, her sister became Club Winner of Hungary. Isabelle in Brasil got Youth Champion title.

Atreyo is a good example of breeding regularity which says that males with high potential are coming from well-thought out matings, excellent breeding females and litters full of influental dogs.
During his short life, he mated nine females. From this nine females he has two world champions daughters... 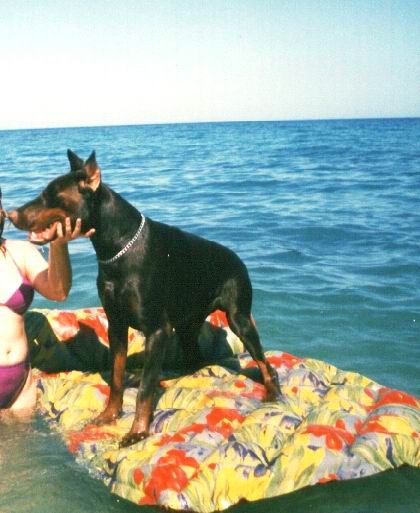 Special thanks to Natalia Ditko for her help. 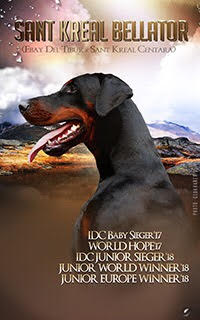 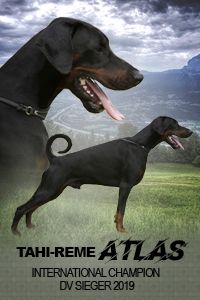 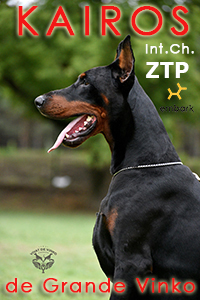 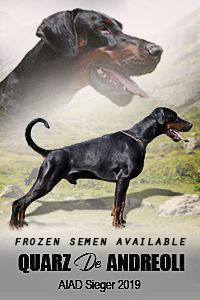 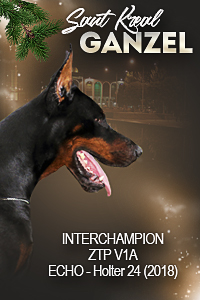 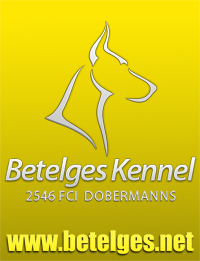 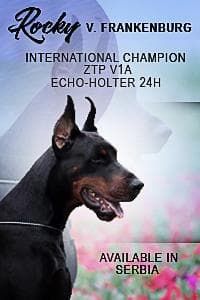 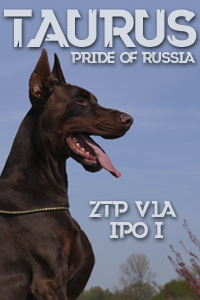 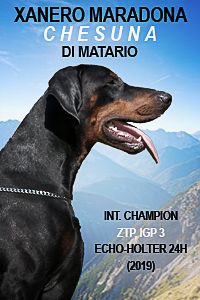